One can only wonder what would have been if General Motors and their evil accomplices hadn’t wiped out regular steam in the USA so early. I was only born in 1952, and living in Australia had no chance to see these amazing machines plying their way through spectacular scenery with incredible power. 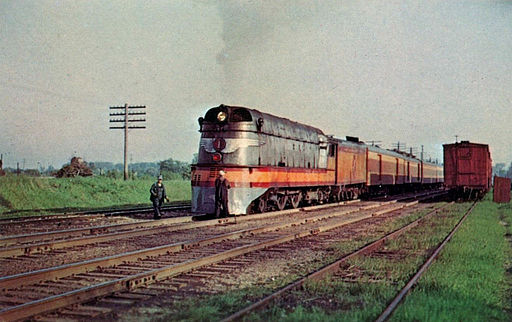 There is no doubt that streamlined engines are FAST. Whether they beat their non streamlined cousins, I am not sure, but they do feature prominently in the list of fastest trains.

In my experience we have 3801 and 520 in Australia, the British A4 and some of the US steam fleet all putting in fastest speeds.

While the Hiawathas didn’t survive into preservation (imagine a 100mph Atlantic) one Norfolk and Western J Class no 611 did.

A famous railway photographer threatened to buy the engine and then N & W donated it to a museum. It operated for many years, but was retired in 1994.

While it probably doesn’t go that fast now, it travelled at over 110 mph in regular service.

The following video has some great footage of the July outing. It is the best I have found of this engine in action.